Just our cup of tea

As focused as we are at BrewHub on the delicious coffee bean, we know there are plenty of people out there, equally devoted to the perfect cup of tea – some even work at BrewHub!

It turns out that our tea drinking clients are just as discerning about their favourite brew as the coffee drinkers. So, consistent with our vision to provide the best corporate coffee experience, it made sense for BrewHub to collaborate with the premium, specialty tea supplier – Elmstock Tea. 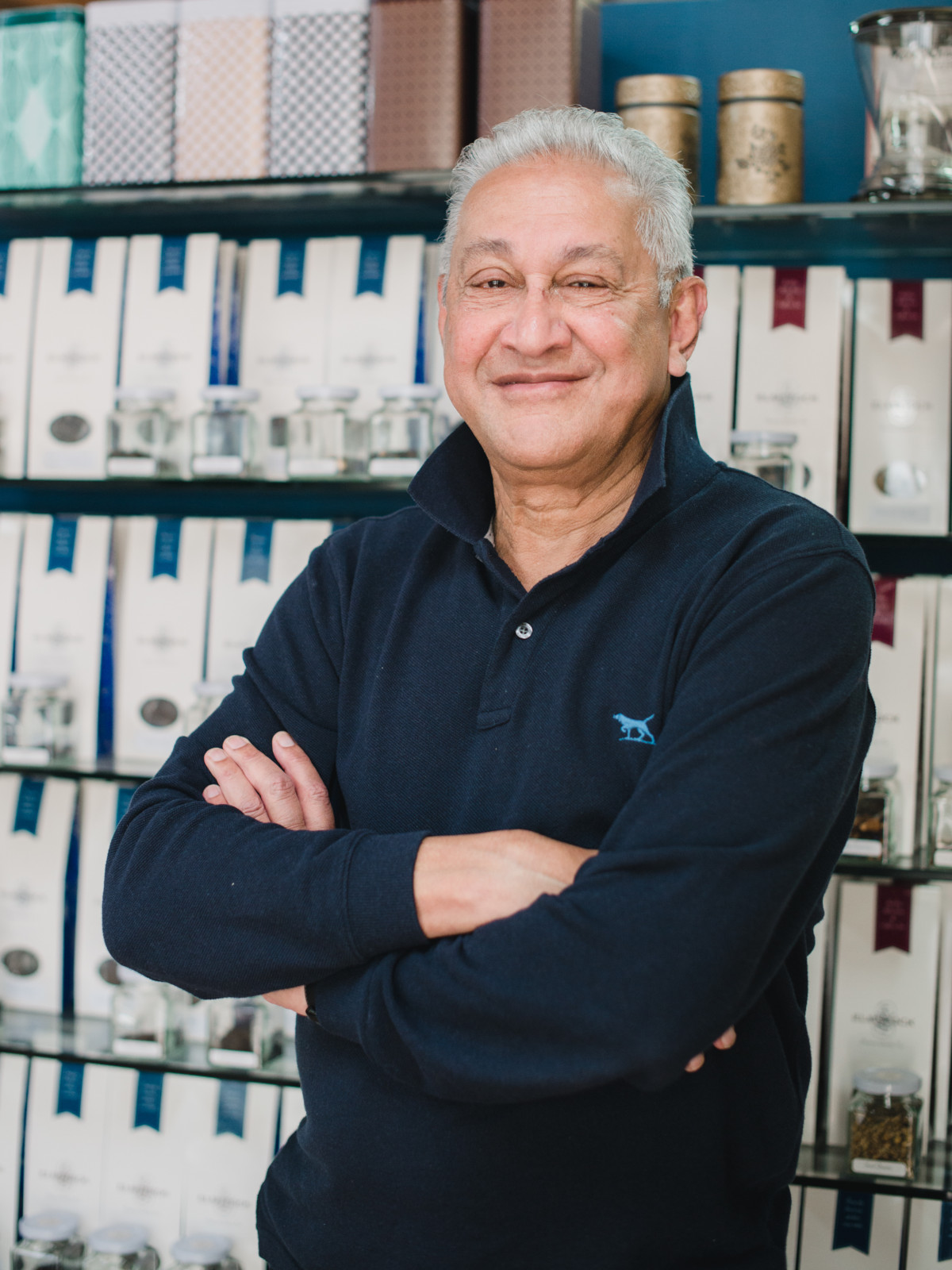 Hilary White founded the Elmstock Tea company in 1979 and since then is the supplier of choice for many hotels, restaurants and cafes in Western Australia. More recently Elmstock supplies gourmet groceries and quality independent supermarkets as well.

Elmstock and BrewHub have been working together for over ten years and share the same philosophy and commitment to providing excellent customer service. This means we both place a high value on developing long-term relationships with customers and a reputation for quality products.

BrewHub receives very positive feedback about the quality of Elmstock’s teas with their English Breakfast blend, Green and Peppermint teas the current favourites.

We recently spent a fascinating morning with Hilary – a walking encyclopedia of all things ‘tea’.

Hilary’s family connection to tea can be traced back to the 1800s on the island of Ceylon (now Sri Lanka), where his great grandfather initially cultivated sugar and coffee. When the coffee plantations were blighted by fungi in 1870, he joined with other plantation owners in the arduous work of clearing land with elephants – establishing some of the first major tea plantations in the beautiful, fertile hills of the central highlands.

The highlands provide the ideal tea growing climate and produce the highest premium quality tea available in Sri Lanka today. (Although the country is now Sri Lanka, the tea is still called ‘Ceylon’.)

From a royal dowry to the middle class

What many people don’t know is that tea only became popular in Britain with the aristocracy, after the marriage of King Charles the Second to the Portuguese Catherine Braganza, who brought tea to England as part of her dowry.

Tea came from China and from India where the British established plantations in Darjeeling. It was a prized commodity, reserved only for the wealthy and consumed as a health tonic. But by 1890, the iconic Scottish merchant Sir Thomas Lipton, with his expanding chain of grocery stores, bought plantations and started distributing Ceylon tea and blends under the ‘Lipton brand’ to ordinary people.

The tea plant ‘camellia sinensis’ has white and yellow flowers, a hard-shelled fruit like a nut and green serrated leaves. It takes five to six years to adequately grow for tea and must be pruned regularly.

In Sri Lanka, the harvesters are always women. They pick, by hand, the two uppermost leaves and the newest bud – the pale green, youngest and most tender part of the plant – known as the flush. In some countries they pick the tea mechanically but in the highlands of Sri Lanka where the slopes are very steep, this delicate harvesting is done entirely by hand and for all four seasons throughout the year. 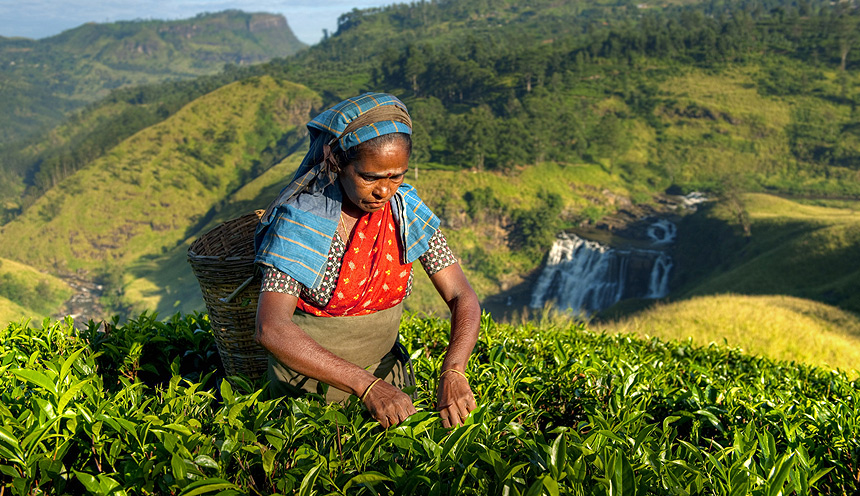 The very first flush harvest yields the purest and freshest cup of tea.

It is not easy work. However, tea pickers in Sri Lanka are now unionised and wages have improved. The plantations often cover between 300 and 500 acres, and are essentially townships in their own right, with schools, hospitals and a temple.

Flushes and harvests differ from country to country.  Darjeeling in India has three seasons: spring, summer and autumn. Teas picked before and after the monsoon season have quite different aromas and flavour.

In some areas the tea needs shade and shelter from the wind, so it is common to see trees with their beautiful canopies spreading over the tea bushes. 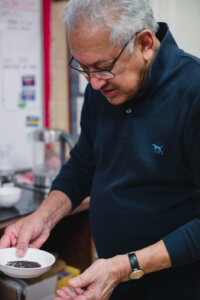 There are several stages to tea production and different methods. The orthodox approach is to ‘wither’ the leaves – spread out on ventilated, temperature controlled trays to dry – and then rolled to bruise or tear them to release the sap for oxidation. The rolling also releases the essential oils which give the leaves their different aromas.

The next step is fermentation – leaves are left to darken and dry in a room – and the tannins, which give tea its distinctive flavour compounds, are released. The oxidisation is stopped with a blast of heat and the leaves are sometimes rolled a second time.

Hilary explains that the final stage is grading – the tea is sifted through different sizes of mesh and a classification system is applied. For example, long and undamaged leaves –considered the highest grade – are classified as Orange Pekoe or OP, the next grade is Broken Orange Pekoe, then ‘Fannings’ and ‘Dust’, the latter two being finer tea particles generally used in tea bags.

In other tea markets, such as Kenya, a mechanical system is used to produce a completely uniform and very fine ‘fanning’ grade for tea-bags – referred to as CTC or ‘crush, tear and curl’.

2020 has not been the best year for tea in some parts of the world and in India in particular.  No harvesting took place in Darjeeling at all during COVID-19 and devastating floods have affected the Assam region. Climate change is a real challenge for tea – unreliable rain and rising temperatures have an impact on seasons. Sri Lanka has fared better – maintaining the harvest throughout COVID-19.

Elmstock sources 60% of its teas from Sri Lanka, 20% from India, 15% from China and Japan the remaining 5% are herbal teas. Having spent time working at the plantations and visiting the tea auction houses in Colombo, Hilary has enormous confidence in the production and grading of tea in Sri Lanka and buys these teas at their source. By contrast the quality of Indian teas vary and there are issues with pesticides in China, so Hilary relies on Elmstock’s partners in Germany – where tea is exceedingly popular and the market has very stringent quality and regulatory controls – to source Elmstock’s premium Indian and Chinese teas.

Our very own tea ceremony

For tea connoisseurs there are premium ‘single origin teas’, which come from a single region or sub-region, or plantation –  rather like a single malt whisky – compared to blends such as an ‘English Breakfast’ or ‘afternoon tea’ blend which may be made up of 20 different teas. 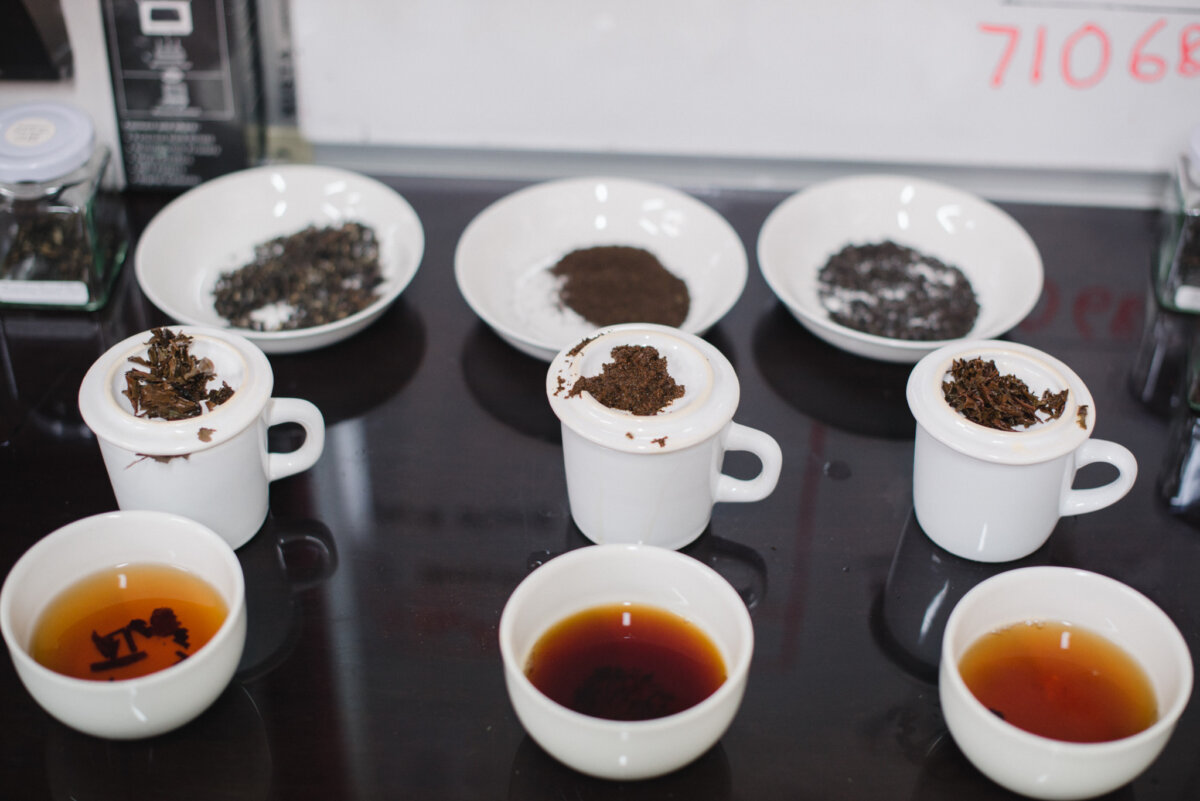 We were lucky enough to sample a number of Elmstock’s premium loose leaf teas, both Ceylon and Indian blends and also some very special single estate origin teas. We examined the longer leaves, short rolled leaves and observed the fine dust that is used for tea bags.  A highlight was tasting a single origin tea from a Ceylon plantation stretching back to Hilary’s great grandfather.

Hilary gave us a lesson in brewing the perfect cup of tea.  Freshly boiled water and a warmed pot are essential plus one teaspoon of tea leaves per cup, with less for green tea. The brew times vary depending upon the variety of the tea.

One milk and two sugars

There are plenty of stories suggesting when and how milk was introduced to tea. Hilary explains that milk and sugar were added to remove the musty flavour that tea developed whilst stored during long voyages on the tea clippers. And later, when hot tea was drunk in china cups, the milk was added first to ensure the china did not crack. As tea with milk became popular, stronger blends, such as English Breakfast – a mix of Assam and Ceylon teas, were developed.

Elmstock’s passion for tea does not stop with supply. Hilary’s team regularly offers training to restaurant and café staff in the best ways to brew and store tea. Tea is impacted by light, air and moisture, so Elmstock recommends storing tea in ceramic or metal containers away from direct light and using dry scoops or spoons – such great tips for our BrewHub valets!

It’s more than just a coffee…

Discover the unparallelled BrewHub workplace experience for yourself.

Our friendly team want to hear from you. Whether you're an existing customer with an enquiry or someone interested in finding out how we could help your business, we're here to help. Let's have a chat.

Call Us Get in touch

Stay updated, we promise not to spam you.
Back to Top